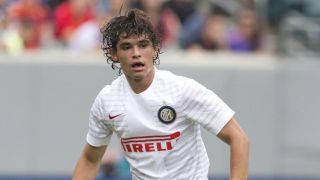 Inter have announced Brazilian wing-back Dodo has left the club for Sampdoria on a loan deal until the end of the season.

The defender had already been linked with Sampdoria for a number of weeks and joined his new team-mates on the training pitch for the first time on Thursday after passing his medical in the morning.

The 23-year-old joined Inter from Roma in July 2014 and made 20 Serie A appearances in his first season at the Giuseppe Meazza. However, he made just one appearance in all competitions in the first half of the 2015-16 campaign and had been deemed surplus to requirements by head coach Roberto Mancini.

Dodo will now be looking to get his career back on track at Sampdoria and could make his official debut for his new club in this weekend's home game against Serie A leaders Napoli.

The left-back has a contract with Inter until June 2019.