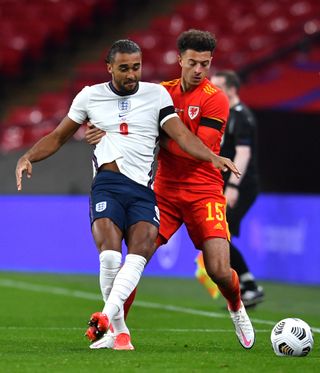 Dominic Calvert-Lewin marked his England debut with the opening goal as the Three Lions saw off Wales 3-0 at Wembley.

The Everton striker made it 10 goals from seven games for club and country this season as his fine form continued.

Here, the PA news agency takes a look at how the 23-year-old fared on his England bow.

The first time three players have all scored their first #ThreeLions goals in the same game since 1963! 😱 pic.twitter.com/XifqYVDFNQ— England (@England) October 8, 2020

Clearly chomping at the bit having hit the ground running for the Toffees, Calvert-Lewin headed home his only real chance of the game.

He had an opportunity early on as his sharpness saw him sweep past Wayne Hennessey in the Wales goal only to be thwarted by the acute angle.

There would be no mistake on 26 minutes, though, as he rose to steer home Jack Grealish’s cross and open his international account.

With such an experimental England side – the starting line-up had just 54 caps between them – it was difficult for the players to click in the early stages.

But Calvert-Lewin led the line well before he was replaced just before the hour mark.

While England will face tougher tasks, and so will Calvert-Lewin if he is to add to his caps, he will be pleased with his first outing.

Despite his goal feats at Everton, in all reality Calvert-Lewin will be playing second fiddle to England skipper Harry Kane in the coming months and years.

It is the same fate for any English forward – Jamie Vardy and Danny Ings have been scoring Premier League goals for fun, but the former stepped down after being forced to play out wide while Ings is another who will be fighting to take his chances when they arrive.

But Calvert-Lewin could do little more than find the back of the net to show Gareth Southgate what he can do and stake his claim for a place in the team.