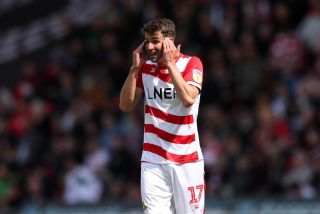 Doncaster midfielder Matty Blair learned about good mental health the hard way but because he did he is determined to make sure his son’s generation catch on early.

The 29-year-old’s path to enlightenment was all too typical for men of his age: confusion when faced with an unwelcome turn, a breakdown, followed by the gradual realisation there is a way ahead.

His turn in the road was the death of his older brother Ross from a rare tumour two summers ago and his breakdown, physical and mental, only manifested itself two months later when he fainted whilst walking his dog.

By that point, Doncaster had begun life in League One following promotion and Blair had already started in Rovers’ opening 10 games, the first coming only a month after his brother’s passing.

#MentalHealthAwarenessWeek 13-19 May: Body image – how we feel and think about our bodies. #BeBodyKind— Mental Health Fdn (@mentalhealth) May 7, 2019

The club gave him a battery of physical tests but they could not explain why he felt so empty – the problem was not in his legs or lungs, it was in his head.

Thankfully, Blair got the time and counselling he needed and it was not long before he was a reliable Rover once more, doing his usual job at the Keepmoat Stadium of covering half a dozen positions at once.

And that reliability was on show again on Sunday as Blair scored a late play-off goal against Charlton, giving his side a chance at The Valley on Friday in the return leg despite trailing 2-1.

His experiences have inspired him to help others and he quickly became the main ambassador for the club’s impressive work in the community.

This had started before the English Football League launched its two-year ‘On Your Side’ partnership with mental health charity Mind last summer – Blair was named as League One’s PFA Player in the Community for 2017/18 – but the link has certainly spurred him on to do even more.

Speaking to Press Association Sport ahead of Mental Health Awareness Week, which starts on Monday, Blair said: “What happened to me took me by surprise – my lack of knowledge about my own mental health was shocking. But I know more now and I would like to keep learning.

“People talk about the ‘talking cure’ and it’s true. The hard bit is getting started and that’s why it’s so important to make time for people. It’s incredible what you can do with even a 30-second conversation.”

This season, which has still not finished for Blair or Doncaster as they face Charlton in the play-offs, saw the Warwick-born player get closely involved in two of the club’s award-winning schemes.

The first is ‘Fit Rovers’, a free, eight-week course for fans over 30 who want to lose weight. It involves tailored exercise sessions and advice on healthy living, and for Blair the Ancient Greek proverb about sound minds in sound bodies is as true now as it ever was.

“It isn’t just about getting fitter, although they do that, too – it’s about their mental wellbeing, as well,” he said.

“Within a few weeks you can see them interacting with each other better and it quickly becomes a strong group of friends. They help each other.”

The second programme is the ‘social cafe’ the club has been putting on every week as part of its engagement with the local branch of Mind.

“It’s a cup of tea or coffee, a slice of cake and a chat at the stadium,” said Blair, who missed the last session because he was in London collecting his second straight League One Community Player of the Year award. This was frustrating as one of the cafe’s regulars had bought him a bag of rock after a recent conversation about Blackpool.

Fan of an EFL club? Fancy a challenge in the great outdoors? Want to tackle mental health?— EFL (@EFL) April 23, 2019

“There’s a guy who comes who struggles to remember his own phone number but can reel off 30 years’ worth of Doncaster rugby league line-ups – sport can open doors that other things can’t,” he explained.

The most obvious example of Mind’s link with the league has been the squiggle from the charity’s logo on the back of every players’ shirt but Doncaster’s commitment to improving mental health on their patch went even further, as they teamed up with NHS Doncaster’s clinical commissioning group to stage a competition to design their third kit.

The theme was raising awareness for mental health and the winning design, a riot of geometric colour on a white background, belonged to 11-year-old fan Nate Nisar.

“The work the clubs, league and (players’ union) PFA have done on mental health is phenomenal,” said Blair.

“We’ve come a long way but there is a lot more to do and I don’t see this as a one-year fix – it’s a generational thing.

“My little boy will be a lot more educated about mental health than I was, he will be brought up being able to speak about wellbeing. That’s great but I want to go further.

“We could easily add a 30-minute or hour-long lesson to the school timetable on mental and physical wellbeing. Just think of the progress we could make if our children could get some education in this area from an expert.”

“Who wouldn’t want their kids to be better equipped to deal with life?”

– Now in its 19th year, Mental Health Awareness Week is organised by the Mental Health Foundation and it runs from May 13-19. This year’s theme is body image.