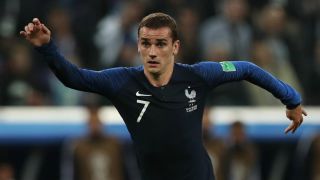 Antoine Griezmann brushed off comparisons to France great Zinedine Zidane as he aims to inspire Les Bleus to a World Cup final victory that he admitted would "change many things".

The Atletico Madrid forward was just seven years old when Zidane scored twice to help France lift the World Cup on home soil in 1998, and 20 years later Griezmann has been hailed as one of the country's talismanic figures in Russia.

As part of a formidable front four alongside Olivier Giroud, Blaise Matuidi and Kylian Mbappe, Griezmann has scored three goals and assisted two, earning him the nickname 'Grizou' - a moniker inspired by 'Zizou', as Zidane is known across France.

Griezmann played down the parallels between himself and such luminaries as Zidane, telling reporters: "I do not like 'Grizou' too much," before describing his ordinary day-to-day habits of playing computer games and drinking tea.

"I'm just like always," he said. "I play Fortnite all day, I enjoy soccer, I drink [yerba] mate.

"I just want to lift the World Cup."

Griezmann described France's defence as key to their chances of clinching the country's second World Cup victory on Sunday, backing himself, Giroud and Mbappe to continue their good form in attack.

France have conceded four goals in six games en route to the final, three of which were scored by Argentina in a thrilling 4-3 victory in the round of 16.

"The defence for us is the most important thing because we know that, at the front, we can score a goal at any time, either with Kylian on the overlap, with Olivier in the centre, or with me in a little madness that can happen to me once in a while," said

Griezmann, who denied any interest in winning the Golden Ball awarded to the tournament's best player.

"It's a chance to win the World Cup, not the Golden Ball," he said. "I do not care if I win the Golden Ball or not; I'll give everything to be world champion.

"I know that a victory can change many things, but we're not really thinking about Monday.

"We are proud to be French. We have a beautiful country, we eat well, we have a great team and I want people to feel proud of being French."