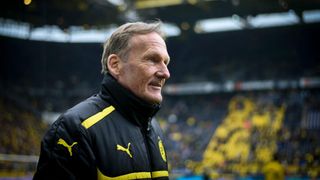 Borussia Dortmund "certainly" have more appeal than Manchester City despite the riches on offer at the Etihad Stadium, club CEO Hans-Joachim Watzke has said.

Last season's Bundesliga runners-up have endured a damaging transfer period so far, having lost Mats Hummels to Bayern Munich and Henrikh Mkhitaryan to Manchester United either side of Ilkay Gundogan's move to City.

Watzke, who has seen Mario Gotze and Robert Lewandowski swap Dortmund for Bayern in the past three years, has conceded that there is a small elite group of super-rich clubs with whom it is difficult to compete.

But the 57-year-old, who is confident in Dortmund's chances this season, has rejected the notion that Pep Guadiola's City are a team that hold greater appeal.

"I would call it a challenging project, and one for which we have no alternative," he said, speaking at a pre-season training camp.

"Simply put, there are five clubs in the world who offer more in terms of appeal and financial power. But when it comes to appeal, we certainly have more than Manchester City, you can state that clearly.

"We feel prepared for the next season with this squad. But we need patience and good nerve, if it doesn't work out in the beginning."