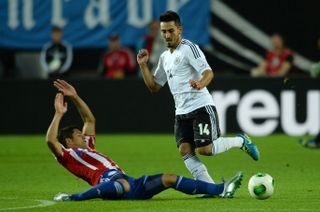 The midfielder scored Germany's first goal during their 3-3 draw with Paraguay on Wednesday, but was replaced immediately.

Gundogan, who played 57 minutes of Dortmund's opening-day Bundesliga clash against Augsburg, had been struggling with the injury in pre-season and this latest news will be a blow to coach Juergen Klopp.

"Borussia Dortmund midfielder Ilkay Gundogan is expected to be out for two weeks after limping off during Germany´s friendly against Paraguay on Wednesday night," it read.

"His back problems, which are a result of a spinal compression, have increased, according to BVB team doctor Markus Braun."

Gundogan made 45 appearances in all competitions for Dortmund last season.