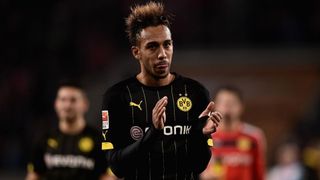 Borussia Dortmund chief executive Hans-Joachim Watzke does not believe the club are dependent on Pierre-Emerick Aubameyang.

The Gabon international has been in sensational form for Dortmund this season, scoring 27 goals in 26 appearances in all competitions.

His performances have prompted suggestions of a move away from Signal Iduna Park in the January transfer window, with Arsenal believed to be heading up a list of potential suitors.

While the Dortmund executive believes the team could cope with the loss of Aubameyang, he does not have any intentions of letting key figures leave.

"One must never make the mistake to believe that a club like BVB is dependent on a player. We are not dependent on anyone," he told Bild.

"When Robert Lewandowski left, we found [a solution] and he even has three more goals than Lewa this season. We are now so well positioned that we can offer alternative solutions again and again.

"[The goal is that] our team stays together. We do not have as much money as the top stars in the Premier League.

"Around this time of year last year, many journalists wrote that our top players would be gone. Hummels was at Manchester United. Gundogan was in Madrid, Manchester or Barcelona. And where are they now? Still with us!"

Dortmund president Reinhard Rauball believes Aubameyang is comfortable in Thomas Tuchel's team and will not be seeking an exit.

"First of all, he has a contract until 2020," Rauball told Ruhr Nachrichten. "Borussia Dortmund are well placed financially with security for years to come and have loyal supporters that you cannot find anywhere else in the world.

"Auba is someone who should feel comfortable. He feels at home here and it shows. [He is] part of a team that works well as a group."