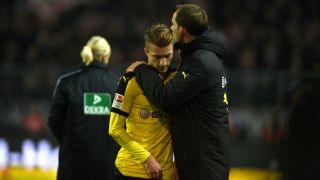 Borussia Dortmund are likely to be without forward Marco Reus for their final two games of 2015, coach Thomas Tuchel has confirmed.

Germany international Reus, who has been plagued by fitness problems over recent seasons, suffered a groin injury shortly before half-time in Sunday's 4-1 win over Eintracht Frankfurt.

Speaking at a pre-match media conference, Tuchel ruled Reus out of Wednesday's DFB-Pokal trip to Augsburg and said he was a doubt for the last match before the Bundesliga mid-season break, at Cologne.

"We can't play Marco Reus tomorrow," he said. "As for the rest, I'll decide after today's training session.

"Reus is ruled out for Augsburg and unlikely, but not completely ruled out, for the Cologne match.

"It happened as he was turning. Marco felt the pain and immediately indicated that he needed to be substituted off. It saddens me because Marco has had no issues recently.

"I was actually very confident that we would guide him into the winter break in fantastic physical condition so that we could go that extra mile in our winter preparations."

Reus scored a brace alongside a Pierre-Emerick Aubameyang hat-trick when Dortmund racked up a 5-1 league win over Augsburg in October but Tuchel expects a tougher test this time around.

Caiuby's last-gasp winner secured a 2-1 triumph over Schalke at the weekend as Markus Weinzierl's side made it three consecutive victories in all competitions.

"Augsburg are not the same team that we have already played at home," Tuchel said. "They will certainly challenge us."