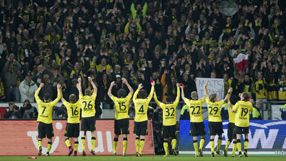 Dortmund, who have the best attack and defence in the league, have been dubbed the 'fun brigade', scoring 29 goals in 12 entertaining games.

"We don't want to focus on the targets other people set for us," said Klopp before the Bundesliga match at fourth-placed Freiburg on Saturday.

"We want to play consistently good football. We set our own targets and we do that every week anew," he said.

Dortmund have conceded only seven goals and top the table with 31 points, ahead of Bayer Leverkusen and Mainz on 24.

They are also only the second Bundesliga team to have won 10 of their opening 12 games.

The Ruhr club have got one of the youngest squads in the league with several players, including 18-year-old Mario Goetze, winning a call-up to play in Germany's goalless draw against Sweden on Wednesday.

But Dortmund, Champions League winners in 1997 and with their last Bundesliga title eight years ago, know problems could lie ahead.

"There are three things that can still happen," warned Dortmund chairman Hans-Joachim Watzke.

"Firstly we have only played 12 games, secondly against Hamburg (in their 2-0 win last week) we had eight players in the starting team who are still eligible to play of the U-21 national teams," he told reporters.

"Thirdly we have also had very few injuries until now and a lot can still happen in that respect."

Looking at Mainz, who shot out of the blocks with seven wins in a row before losing their last three matches, Dortmund's bosses are wise to keep their players' feet firmly on the ground.

"But playing football in Dortmund is all about having fun," said defender Marcel Schmelzer, who also won his first international cap against Sweden. "You can see it in our game."

Mainz, in third place on goal difference, must end their barren run if they are to stay in touch with the leaders when they take on Borussia Moenchengladbach.

Bayern Munich, in sixth place on 19 points, travel to Bayer Leverkusen hoping to extend their unbeaten league run to six games as they recover from a rocky start to the season.