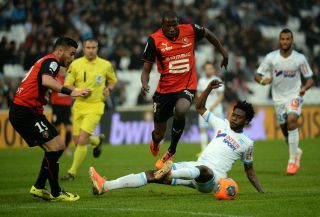 The 21-year-old has impressed for his boyhood club this season, scoring six goals in 23 appearances following a knee ligament injury that kept him out for much of the first half of the campaign.

Doucoure's strong displays have helped guide Rennes to the Coupe de France final, which they will contest against Brittany rivals Guingamp on Saturday.

And the France Under-21 international is hopeful that he can end the week on a high with victory in the Stade de France showpiece after Rennes suffered disappointment in last year's 1-0 Coupe de la Ligue final defeat to Saint-Etienne.

"I have signed just before the final. This week has started well, I hope to end it is ended well. We all hope to play a great match."

Rennes coach Philippe Montanier is confident that Doucoure can build on his good form this term.

"He is a midfielder who is useful to us because of his state of mind and volume of play," Montanier said. "He will continue to make progress."