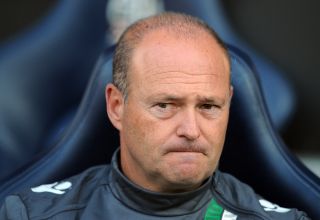 The Spaniard penned an 18-month deal on Thursday and will take charge after Saturday's visit to Southampton.

Downing has been looking after first team affairs since Steve Clarke was relieved of his duties on December 14, and has overseen a four-match unbeaten run in the Premier League.

Ahead of his final game at the helm before becoming Mel's assistant, Downing welcomed the arrival of a full-time head coach.

"It's exciting times." he said. "It's one that has done a full circle and I am pleased personally that it has settled down and we have now got somebody in place.

"An 18-month contract brings a bit of stability to the football club. I think that's what was needed so I am pleased from that point of view because to be honest it has been a little bit unsettling - particularly this last week.

"We have had a lot of rumours flying around; the players have been trying to get on with things and they have done very well.

Downing has yet to meet Mel, but believes his reputation for attacking football bodes well for the club.

He added: "I am aware that he is going to watch the game on Saturday and then we crack on next week.

"I have heard good things about Real Betis (Mel's former club), the fact that he has got them up and stabilised them.

"The Spanish press are quite positive about him but he is a name I wasn't aware of until a few weeks ago.

"He fits the criteria. He wants to play attacking, positive football for the football club. It's a new way forward so it is exciting."

Meanwhile, West Brom full-back Billy Jones is set to be out for up to two weeks after undergoing a minor eye operation.

Jones was injured in an accidental collision with goalkeeper Ben Foster during last weekend's FA Cup defeat against Crystal Palace.

"Billy Jones is definitely out (of the Southampton game)," Downing explained.

"He's had a small operation on his eye after the contact with Ben. It was just a repair to the retina and nothing too serious. He'll be back in the next week or two."