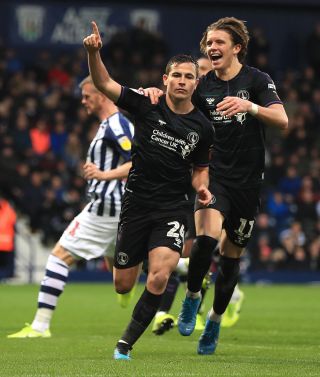 The midfielder rescued a 2-2 draw for the Addicks after Semi Ajayi collided with Naby Sarr in the box.

Hal Robson-Kanu looked to have won it late for the Baggies after Macauley Bonne scored his fifth goal in six games to cancel out Matt Phillips’ early opener for Albion.

Referee Matthew Donohue courted controversy before the penalty after initially sending off West Brom’s Grady Diangana in a case of mistaken identity – before correcting his mistake and dismissing Nathan Ferguson in the second half.

Albion did at least extend their advantage at the top of the Sky Bet Championship to two points, with Charlton 10th.

The Baggies looked to take immediate advantage of Leeds’ lunchtime draw at Sheffield Wednesday and opened the scoring after 10 minutes.

Jake Livermore sent Matheus Pereira clear and his low cross was a gift for Phillips to fire in at the far post.

Baggies boss Slaven Bilic then had more reason to feel relieved five minutes before the break when Sam Johnstone kept the hosts ahead.

Sarr was clipped through by Oztumer but, despite having just Johnstone to beat, squared to Gallagher.

The midfielder’s shot was stopped by Johnstone and the goalkeeper then produced a superb block to turn away Sarr’s follow-up.

But the visitors could have gone into the break further behind when Darnell Furlong headed wide from close range.

Albion upped their game after the restart and Phillips fired over before Diangana wasted a glorious chance to make it 2-0 after 50 minutes.

Pereira found Phillips and his low cross begged Diangana to score but he shot straight at Dillon Phillips from just four yards.

It was a bad miss and Phillips kept Albion out again, racing out to block from Furlong, soon after.

They were crucial saves as, on the hour, Charlton levelled when Cullen’s 25-yard drive looped high off Bartley and Bonne kept his cool to nod in from six yards.

It got worse for Albion four minutes later when Ferguson flew into Solly on the halfway line and referee Donohue sparked mass confusion.

The official took his time before issuing a red card to the bewildered Diangana.

Protesting Albion were furious and Donohue consulted with his assistant and fourth official, finally dismissing Ferguson.

Robson-Kanu cut in from the left and, with Lockyer standing off, curled into the bottom corner from 16 yards.

But Charlton hit back in the fourth minute of stoppage time when Ajayi came together with Sarr in the box and Cullen buried the penalty.