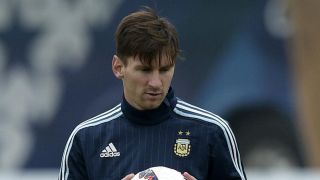 Rodolph Austin will live out a dream when he takes to the field against Lionel Messi in Jamaica's Copa America meeting with Argentina on Saturday.

The two sides go head to head in their final Group B fixture, Argentina sitting top with four points while Jamaica are bottom having lost both of their matches.

And Austin, released by Leeds United last month, is eagerly anticipating taking on arguably the game's greatest ever player, with Messi set to win his 100th cap.

"It's definitely a dream come true for me personally and all my team-mates to even be on the same pitch as Messi," he said.

"It's a pleasure for them. It's for us just to go out there and do our best against the Argentina team because it's 11 men on the pitch.

"Messi is the best player in the world, a fantastic player and it seems like he's a nice guy.

"I don't know him personally, but on the pitch he's very humble and stuff. It's just for us to go out there and do our best against him and the rest of the 10 men on the pitch.

"Anything can happen. The ball is round and as you can see in the tournament, all the games have been very close.

"We can go out there tomorrow and give a good account of ourselves and do very well as a team."

Jamaica's only chance of qualifying is to win and hope that is sufficient to go through as the best third-placed side.