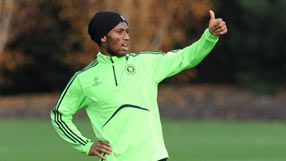 The Ivorian has been in and out of the team in recent weeks because of a fever but it was only on Monday that doctors told him he had been suffering with malaria.

"I want to score every game but when you can't, when you're not 100 percent, it's better to try a way to help your team-mates, maybe creating assists, maybe defending a little bit more," Drogba told Chelsea TV ahead of Wednesday's derby with Fulham.

"I think I'll get better and start to score again and if that's what people want I think I can do that."

Drogba started the season with a hat-trick against West Bromwich Albion on August 14 but since then he has managed just two goals from open play for Premier League leaders Chelsea.

"When you don't know exactly what it (the illness) is and it's not treated, it can come and go," he said.

"You have some weeks when the fever can be high, that's what I had, but now it will be better.

"Unfortunately we only found out (on Monday) it was malaria but I've had it for a month now. Now we know exactly what it is we can go forward."