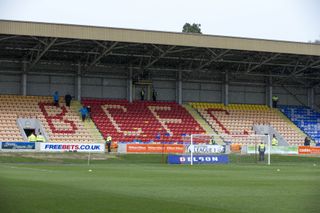 Dundee United assistant boss Stevie Frail saw the 6-2 Betfred Cup win at Brechin as a good way of getting their late defeat by Livingston out of their system.

United named a strong side and doubles from Nicky Clark and Cammy Smith, along with goals from Ian Harkes and Calum Butcher, saw them bounce back from their league defeat.

Frail said in a video on United’s Twitter account: “That’s pretty much been the starting team for the last few weeks and we are taking this competition seriously.

“It was good also to get most of that team back out on the pitch after the disappointment of Friday night against Livingston. That was the thoughts behind that.

“Six good goals, delighted with the win, but disappointed with the manner we lost the two goals.

“Things to work on in the training ground but happy with the win and we look forward to Peterhead on Saturday.”