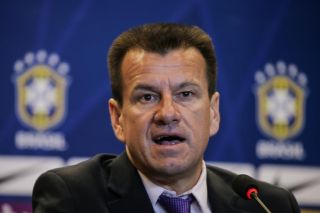 Dunga named a 22-man party for next month's friendly fixtures with Colombia and Ecuador last week, with only 10 players retained from the World Cup squad.

However, Dunga has offered an olive branch and stated it is up to those that were excluded to prove they deserve to be called up.

"From the list you can see that there are more options for the national team," he said.

"The players that were in the World Cup and did not make the list have open doors.

"No one is counted out, even the ones that are here are not 100 per cent guaranteed, it depends on what they do."

One of the new faces in Dunga's squad is Corinthians' Elias, who earned the last of his 13 Brazil caps in February 2012.

The 29-year-old midfielder is now keen to make the most of his opportunity, saying: "I am happy with the trust coach Dunga has shown in me.

"Now I have to work and focus on Corinthians, and guarantee my place in the next call-ups."