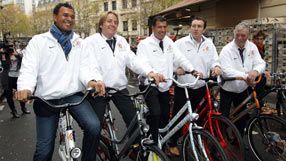 About 80 fans travelled by coach from Amsterdam and Antwerp and congregated in a small square off Zurich's most expensive shopping street Bahnhofstrasse.

While bid chief executive Harry Been, president Gullit and ambassador Jean-Marie Pfaff, emphasised the message that small is beautiful, the oompah-oompah of the band filled the night sky while the mulled wine flowed.

FIFA will choose the 2018 World Cup hosts on Thursday with the Dutch and Belgians vying with England, Russia and another joint-bid from Spain/Portugal.

Unlike most media briefings staged in clinical hotel meeting rooms, the Dutch and Belgians took over a swish city centre bar with the speeches coming in a warm party atmosphere and with fans in the orange shirts of the Dutch and the red of Belgium singing "You'll Never Walk Alone" and "We are the Champions".

As Gullit said: "We do things differently from the others because we always think two steps ahead.

"That's the only way to survive where big countries all the time have the possibility to do their thing.Our fans are something very special and the whole world knows that."

Been said that about a year ago, the bid was ranked as "modest outsiders" but added: "Now we feel we are in the position of being a strong contender.

"But you never know what is going to happen because in the end it is one person who votes secretly so we will never know who voted for who."

"Of the 208 member countries of FIFA, maybe 10 can organise it themselves maybe 198 can only do it together with another country.

"FIFA need an example to show the world joint-bids have a future. In 2030, Argentina and Uruguay want to organise it together and they need Holland and Belgium to show them it is possible."

Gullit added: "FIFA knows we can organise a great tournament, they know what we did with Belgium in the Euros in 2000 and they know we can do it again."