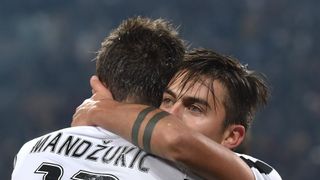 Paulo Dybala and Mario Mandzukic have both been passed fit to take their places in the Juventus team for Wednesday's Coppa Italia final against Lazio.

The forwards had been doubts for the game due to muscle injuries but are included in Massimiliano Allegri's starting lineup as Serie A leaders Juve seek to clinch the first trophy of a possible treble.

Tomas Rincon earns a rare start in midfield as Miralem Pjanic is suspended and Sami Khedira is injured, while Neto deputises for veteran goalkeeper Gianluigi Buffon.

The Champions League finalists are also without Marko Pjaca and Daniele Rugani for the final, which is being played at Lazio's home ground, the Stadio Olimpico.