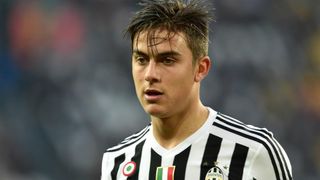 Juventus forward Paulo Dybala has the talent to become one of the best players in the world, according to team-mate Kwadwo Asamoah.

Dybala has scored 11 goals in 19 Serie A appearances this season following his €32million move from Palermo.

Juventus are on a run of 10 successive wins in the league, with Dybala finding the net seven times in his past nine games.

The Argentine scored twice as Juventus recorded a 4-0 win over Udinese on Sunday, drawing praise from his team-mate Asamoah.

"Paulo is proving what a talent he is right now," Asamoah told Sky.

"I’m not surprised having seen what he was capable of during his time at Palermo.

"At 22-years-old, he’s still very young and he has all the ability to become one of the best players around."

Asamoah has missed the majority of the past two seasons with injury but played just his second 90 minutes since 2014 in the win over Udinese.

"There were several moments when I asked myself when I would get back playing again, because, whenever things were looking on the up, there would always be a new setback throwing my progress off course," he said.

"Right now, though, I’m in good shape. During the entire week leading up to the game, I felt that things were going well.

"Of course, it’s up to the coach [Massimiliano Allegri] to decide who starts, but I could sense that I was ready. I’m delighted that we managed to win a very important match [against Udinese], just like the previous nine.

"Midfield or wing-back? I enjoy playing in both roles very much. I’m happy to have returned to the middle of the park, where I first started my career, but I also feel at ease on the wing thanks to my first couple of years at Juve."