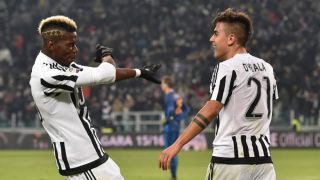 Paulo Dybala is not getting carried away despite his fine individual form helping lift Juventus back into the Serie A title picture.

After an underwhelming start to the campaign for both player and club, Argentina forward Dybala has scored eight goals in Juve's current run of 11-consecutive Serie A wins.

The 22-year-old scored the only goal of the game to help Juventus see off Roma on Sunday and he is determined to keep delivering the goods in the remainder of the season.

"My goal remains that of helping this team win a fifth straight Scudetto," Dybala told reporters.

"It's always satisfying to hear certain compliments, but there are still plenty of matches left to play and we've not achieved anything just yet.

Dybala sits second in the Serie A goalscoring charts behind compatriot Gonzalo Higuain after fellow Argentine Mauro Icardi finished 2014-15 as joint top scorer and he believes an innate passion for playing up front may have contributed to the country's success in Serie A.

"As a child, everyone wants to become a top striker for Argentina," he added.

"The 10-year-olds are dreaming of being the next Lionel Messi."