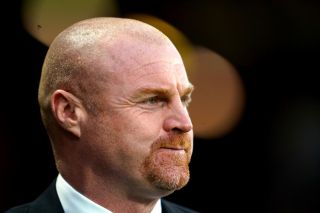 Burnley boss Sean Dyche said logic tells him there is no need to panic as his side bid to halt their poor Premier League run.

The Clarets head to Chelsea on Saturday having lost their last three league games, while nine defeats in 13 have left them four points above the bottom three in 15th place.

“There’s lots of different things. I wouldn’t say ‘calm’ about everything, but I like to work on logic and realities, so that keeps me a little bit more level about what the challenge is, I think.”

Dyche said it helps now he is an experienced Premier League campaigner after steering the Clarets to 15th, seventh and 16th-placed finishes in the last three seasons.

“We’re in the fifth season out of six in the Premier League. If you think it’s going to be plain sailing, you’re wrong,” he said.

“Therefore you’ve got to get used to the things that hit you and then you’ve got to remind yourself of the good things you do, to work through those phases to get what you want.”

Goalkeeper Joe Hart and striker Jay Rodriguez have both recently been linked with a move away from the club during the transfer window but Dyche insisted he is not thinking about outgoings.

“It is more the getting people in, getting competitive players into the building and of the level that can move us forward,” Dyche added.

“We haven’t had anything that means anything for our players so there is no reason to think about it too much.

“We’re certainly not in a position where we need to sell anyone. The club is in very good financial health, so there’s no demand on that.”

Burnley are expected to be without striker Ashley Barnes (groin) and midfielder Johann Berg Gudmundsson (hamstring) at Stamford Bridge.

Rodriguez and defender Phil Bardsley are also doubtful due to illness but striker Chris Wood (hamstring) is likely to be fit.