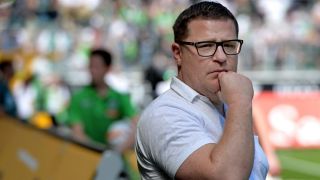 Borussia Monchengladbach director of sport Max Eberl is flattered to be linked to the role as Bayern Munich's next sporting director.

Matthias Sammer quit the role at Bayern on Monday, three months after being diagnosed with a brain illness he has since recovered from.

Eberl, a former youth player at the Bundesliga giants, has been spoken about for the role.

"Of course, you already feel a little flattered if one is associated with Bayern," he told Sport Bild.

Bayern chief Karl-Heinz Rummenigge said the club had no plans to replace Sammer "until further notice".

Eberl is contracted at Monchengladbach until 2020.