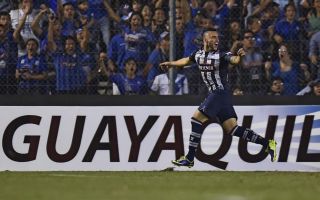 A brace from Emanuel Herrera clinched a vital three points for Emelec, who again took advantage of a slip-up by Independiente to move within striking distance, ahead of the final three rounds of the Primera A's second phase.

Independiente had lost 2-0 at LDU Quito on Sunday - their second straight loss - which left them on 40 points, and Emelec (38) moved up to third and within a victory of the leaders with less than a fortnight remaining in the season.

Barcelona (39) sit second in the table, while LDU Quito (37) slipped to fourth after Emelec's triumph.

With the overall league triumph to be decided based on aggregate points accumulated over the two phases of the Primera A campaign, Emelec's win took them into the overall lead with 82 points, two ahead of Independiente.

Herrera opened the scoring in the 43rd minute when he collected a ball in the left channel, cut back onto his right boot and fired across Loja's goalkeeper and inside the far post.

Just two minutes after the break and Herrera doubled his tally, getting on the end of a right-wing cross to head home.

The result continued Loja's terrible form - they have lost four in a row and have won just one of their past 10 games, while it was Emelec's seventh victory in eight matches in all competitions.

Emelec face Manta, Deportivo Cuenca and Olmedo before the end of the season, while Independiente will take on El Nacional, Olmedo and Manta.