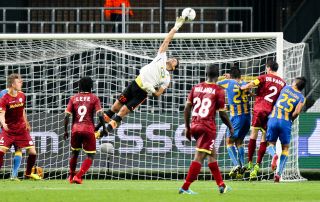 Jonathan Gonzalez and Julio Eduardo Angulo both scored in the closing stages to clinch the win for Independiente after Deportivo Cuenca had equalised at 1-1 in the 82nd minute.

The victory took Independiente to 30 points and they moved above Catolica on goal difference after the latter were held to a scoreless draw at home by Deportivo Quito.

El Nacional remain within touching distance of the top of the table as well after Marwin Pita's double saw the capital club overcome Manta 2-1.

The win took El Nacional to 27 points in fourth spot, four ahead of Deportivo Quito, who sit fifth.

In Cuenca, Independiente edged ahead in the 74th minute through Junior Sornoza but the hosts looked to have done enough for a draw when Andres Rios converted a penalty eight minutes later.

The visitors were not finished, however, with Gonzalez scoring within a minute of Rios' spot-kick before Angulo capped off the victory for Independiente with his own penalty late in stoppage time.

In Ambato, Emelec had to work hard to lead at half-time with Denis Stracqualursi breaking the deadlock three minutes before the break.

Vinicio Angulo doubled Emelec's lead in the 59th minute before Stracqualursi completed his brace with 14 minutes remaining, while Marcos Caicedo completed the four-goal triumph with a strike in the final minute.