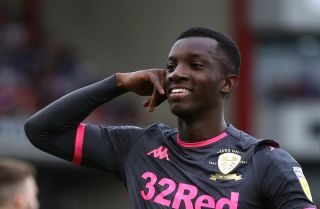 Eddie Nketiah came off the bench to salvage a point for Leeds in a 1-1 draw against Preston at Deepdale.

Tom Barkhuizen’s fifth strike of the season after the break handed the Lilywhites the lead, but Arsenal loanee Nketiah struck as full-time approached to ensure the spoils were shared.

Leeds threatened when Kalvin Phillips’ teasing corner inside the opening five minutes found Patrick Bamford but the former Chelsea forward could not direct his header goalwards.

Bamford was slipped in by Stuart Dallas inside eight minutes but his first-time shot did not trouble Declan Rudd in the Preston goal.

Browne’s half-volley fizzed across Kiko Casilla’s box on the quarter-hour mark for the Lancashire side and Leeds marksman Bamford rose highest to meet Phillips’ 22nd-minute corner but was again guilty of wastefulness.

Lilywhites defenders Ben Davies and Patrick Bauer made crucial challenges within seconds of each other to deny Dallas and then Bamford.

At the other end, Preston striker David Nugent was expertly threaded through by Barkhuizen and it took an onrushing Casilla to clear the danger.

The visitors could have taken a 38th-minute lead when Ezgjan Alioski was teed up at the edge of the box and fizzed a low shot a whisker wide.

After the break, Leeds right-back Luke Ayling’s cross found Jack Harrison at the far post who drilled into the side netting from close range, while Dallas’ long range effort was deflected as it made its way to Rudd after the hour.

Bamford missed a gilt-edged chance for Leeds with more than 20 minutes left as he rushed onto Mateusz Klich’s cutback but snatched way off target.

And Leeds were made to pay for their profligacy in front of goal when Preston’s Sean Maguire raced free down the right and crossed for a free Barkhuizen to tap home with little over 15 minutes remaining.

Dallas blasted a long-range effort which continued to rise, before Maguire tried his luck from an acute angle which Casilla parried to safety.

Barkhuizen nearly had his and Preston’s second of the evening with seven minutes left but was unable to keep Browne’s corner on target.

But Nketiah rescued a point for the Whites after looping a header over Rudd and in despite Bauer’s best efforts on the line with just three minutes left.

Potts nearly claimed all three points at the death for Preston with a glancing header which beat a leaping Casilla but floated inches wide.