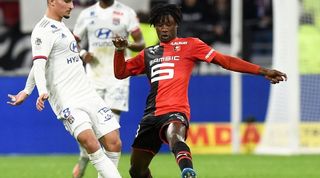 The 17-year-old has attracted a lot of attention with a string of impressive performances for the Ligue 1 side this season.

L’Equipe reported on Tuesday that Real Madrid have expressed interest in signing the player.

That has been followed up by Spanish daily AS, who write that two senior scouts evaluated the midfielder’s performance against Amiens on Wednesday evening.

The teenager was in the starting line-up as Rennes fell to a 3-2 defeat in the Coupe de la Ligue tie.

Real Madrid are said to be seriously considering a move for Camavinga, but could face competition from domestic rivals Atletico Madrid and Barcelona.

He became Rennes’ youngest ever first-team player when he made his debut at the age of 16 year and one month in December 2018.

Since then, Camavinga has established himself as an important player for the French outfit, missing just one league game all season.

He has made 21 appearances, scoring one goal, in the 1-0 win away to Lyon on Sunday.