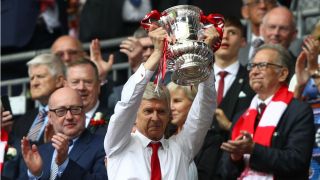 Arsenal head to Wembley on Sunday chasing their remaining prospect of domestic silverware this season in the EFL Cup final against Manchester City.

It is the only major prize in English football Arsene Wenger has not lifted in his acclaimed career.

However, the veteran Frenchman has enjoyed numerous moments to remember at the national stadium, especially over recent seasons to partially placate fan frustrations over Arsenal fading from the Premier League title picture.

12 – Outside of Highbury/Emirates, Arsene Wenger has won more games in charge of Arsenal at Wembley Stadium than any other ground. Haven. August 6, 2017

Still basking in the afterglow of captain Tony Adams sealing the Premier League title in fairytale fashion, Marc Overmars and Nicolas Anelka were on target at the old Wembley to seal a domestic double. It was Arsenal's seventh FA Cup triumph; Wenger alone now has seven to his name over the course of his tenure.

Nine years without a major trophy had really started to grate on the Gunners' fanbase and they looked set for a humiliation on par with the 2011 League Cup final loss to Birmingham City when James Chester and Curtis Davis put Hull 2-0 up inside eight minutes. Santi Cazorla's rasping drive provided a timely response and, after Laurent Kosielny forced extra-time, Aaron Ramsey – not for the last time – proved to be Arsenal's Wembley hero.

Winning the traditional curtain raiser for the English season is never usually an accomplishment to linger upon but Alex Oxlade-Chamberlain's excellent first-half finish was enough to finally - after 13 failed attempts – give Wenger a victory over bitter rival Jose Mourinho. An abject Chelsea title defence followed and Mourinho was sensationally out of a job before Christmas.

A huge source of encouragement for this weekend, Arsenal were up against it when Sergio Aguero dinked beyond Petr Cech to open the scoring in a finely poised encounter. Wing-back crossed to wing-back when Nacho Monreal converted Oxlade-Chamberlain's searching delivery from the right to equalise and Alexis Sanchez pounced on poor set-piece defending during the additional period.

The City side who Arsenal saw off last April were a shadow of the expertly honed team Pep Guardiola now has at his disposal, but Wenger also has recent experience of vanquishing English football's dominant force in a showpiece final. Chelsea were heavy favourites to complete the double, having marched to the Premier League title, but ran into a rampant Arsenal, who led through Sanchez's controversial opener. Diego Costa levelled on his final Chelsea appearance but Ramsey found an instant response. Wenger had his seventh FA Cup and would soon pen a new two-year contract.