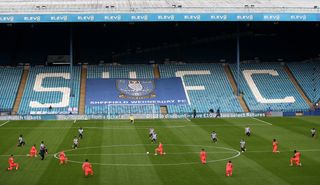 The English Football League wanted Sheffield Wednesday’s 12-point deduction for breaching Profit and Sustainability rules imposed during the 2019-20 season, which would have relegated them, but an independent panel ruled against it.

Wednesday were found guilty of breaching financial protocols after they included the sale of Hillsborough to chairman Dejphon Chansiri in their 2017-18 accounts when it was proven to have taken place afterwards.

The panel’s written reasons showed the South Yorkshire club to have backdated a Heads of Terms agreement while also failing to supply all relevant documentation to the EFL. They were cleared of a second charge of not acting in “good faith” regarding the lengthy and complex investigation, which the commission said was dogged by “allegations of dishonesty, bad faith and deception”.

Wednesday have confirmed following the release of the written reasons of the case that they will appeal the decision.

The commission handed them a 12-point penalty but decided it would have been unfair to impose it during the truncated 2019-20 season – a sanction that would have seen the Owls relegated from the Championship.

Charlton went down instead and the London club challenged the decision, but it has now emerged in the written reasons that the governing body contested for the penalty to be imposed immediately.

However, its handling of the second charge, which was heavily criticised in the documentation from the commission, led to a delay in the hearing which meant, because of the coronavirus pandemic, the season was still going on.

The commission also decided that because the sanction should have occurred in the 2018-19 campaign – when the Owls would not have been relegated – and the EFL’s inconsistency with regards its handling of a similar case against Derby, that it would be unfair to impose it in 2019-20.

The written reasons said: “These are very unusual times and what may seem appropriate at this precise moment may not necessarily be so in similar circumstances at other times, but our conclusion was that the combination of (i) the fact that had the 12-point deduction been imposed when, according to the general approach, it should have been (during the 2018-2019 season), the club would not have faced relegation, (ii) the actual or perceived inconsistency of the EFL‘s approach in the Derby County case and (iii) the potential effects of the delays caused by the bringing of the eventually dismissed charge 2, makes it inappropriate to impose the deduction in the current extended season, but to postpone its effect until next season when the onus will be on the club to redeem its position on the playing field.”

Neither party came out of the case without strong criticism from the commission.

The report said: “Ever since the two charges faced by the club were formulated in November 2019 and pursued thereafter, there have been mutual recriminations by each side involved in the discussions, with allegations of dishonesty, bad faith and deception.

“Whatever the outcome of these proceedings, there are some lessons to be learned from this very unhappy scenario.”

Wednesday were shown to have tried to get around breaking spending rules by backdating the sale of their stadium.

They submitted a Heads of Terms agreement in August 2018, with signature dates of July 2018, and then failed to supply all the relevant documentation to the EFL – which included an external valuation of Hillsborough or any proof they took legal advice regarding the sale.

The commission also ruled against Wednesday’s claim that the EFL was acting against them as a response of criticism from other clubs and criticised their “hastily considered rescue attempts”.

The EFL’s handling of the second charge was heavily condemned as they brought individual charges against Chansiri, Wednesday’s chief executive at the time Katrien Meire and financial director John Redgate and then later dropped them, with the written reasons saying any deliberate deception was “inherently improbable”.

The governing body was accused of rushing a charge through without proper investigation and not giving documentation proper scrutiny, which led to a delay in the case being heard.

“The club believes its grounds of appeal to be strong. The club will continue to take all appropriate steps to protect its interests, for the benefit of the club and its supporters, and looks forward to the appeal being heard by the League Arbitration Panel at the earliest opportunity.

“While the club does not set the timetable for the hearing of the appeal it considers it likely that it will take place in autumn 2020.”