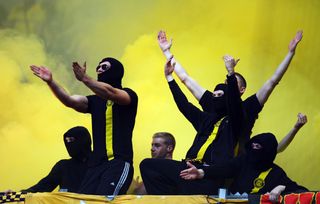 The match at the Veltins Arena – which finished 3-2 to Dortmund - was delayed as sections of the visiting support appeared to launch flares onto the pitch and at Schalke fans.

Dortmund coach Jurgen Klopp admitted he was "ashamed" of the incidents, and police also revealed trouble continued after the match as supporters caused damage to property as well as destruction and vandalism in the away section of the stadium.

Police confirmed that they had made eight arrests after the match with three taken into custody, and were quick to insist clubs need to do more to ensure flares are not taken into grounds.

"From the figures alone, it sounds like a normal derby, but the horrifying images we all have in mind," a police spokesperson told Bild. "These are not fans, but criminals.

"They wanted to cause harm to life and limbs of innocent bystanders.

"We will evaluate the footage. But it will cause us some problems, because the perpetrators were heavily disguised.

"The controls are the responsibility of the stewards, not the police."

Dortmund's victory saw them maintain their good start to the Bundesliga season and stay within a point of leaders Bayern Munich.