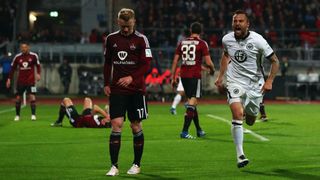 Haris Seferovic scored the only goal of the game to help Eintracht Frankfurt to a 1-0 win over Nuremberg at the Grundig Stadium on Monday and secure another season of Bundesliga football.

Frankfurt knew they had to attack after last week's 1-1 draw at home and they did just enough to see off Nuremberg in the return.

Seferovic found the net in the 66th minute with an easy finish after some great work from Mijat Gacinovic down the left to give the guests a 2-1 lead on aggregate, meaning Nurnberg could no longer sit back and were forced to come out of their shell.

The 2.Bundesliga side were unable to create any chances of note, though, and will have to settle for a place in Germany's second tier once more in 2016-17.

Freiburg and RB Leipzig had already clinched promotion to the Bundesliga, with Hannover and Stuttgart dropping to the 2.Bundesliga.