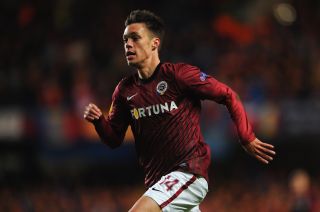 The 21-year-old scored 14 goals in the Czech Liga last season and has started this campaign well with three in five league matches.

Frankfurt will be hoping the Czech Republic international can arrest their early-season woes and give them a different option in attack.

Armin Veh's side have lost both of their opening fixtures, conceding seven goals in the process and are bottom of the table, but he is confident Kadlec can have an impact.

"I am glad that it worked out," the coach said after the club announced his arrival. "I must say that the player has cost a lot of money by our standards, but you should be careful with the expectations anyway. He is still young and should develop over several years here. "

"We found early on that we have two central strikers. However, we needed someone who can play multiple positions. Václav can do that."

Kadlec admitted he was excited about beginning a new chapter in his career in the Bundesliga and promised to do everything he could to improve their current form.

"For me, the Bundesliga is one of the three strongest leagues in the world, and I can develop my talent here," he said.

"Eintracht Frankfurt has long fought for me. Frankfurt also played in the Champions League and I hope that we can confirm the result of the last season.

"I like to play in the striker. But I can also play left or right, and also behind the tip."

Kadlec became the youngest goalscorer for the Czech national side with his strike against Liechtenstein in October 2010.