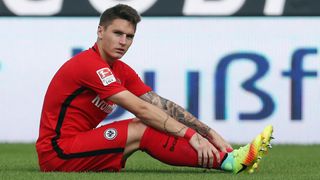 Eintracht Frankfurt have ended their interest in signing Guillermo Varela from Manchester United after he got a tattoo against the wishes of the club.

The 24-year-old full-back had been in line to play against Borussia Dortmund in the DFB-Pokal final on Saturday, but he has now been axed from the squad.

Frankfurt have suspended the on-loan defender due to what they described as "grossly negligent" behaviour after his tattoo forced him to receive treatment.

"Contrary to clear instructions from the coach Niko Kovac, Varela had a tattoo, which has now become inflamed," the club said in a statement.

"Guillermo's path at Eintracht ends here. The club can't put up with a player acting against the coach's and doctors' instructions.

"We were already considering extending his loan. But that is of course no longer an issue.

"Guillermo will be suspended with immediate effect and he will be given a personal punishment."

Varela has missed large spells of the 2016-17 season due to an ankle injury, but played in each of Frankfurt's final four Bundesliga games.

His loan from United was due to run until June 30.