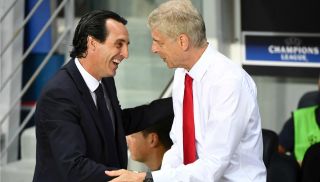 Arsenal legend Robert Pires believes new manager Unai Emery is the best signing the club have made in the close-season.

Emery arrived at Emirates Stadium in May as the replacement for Arsene Wenger after the Frenchman's 22-year spell at the helm came to an end.

However, Pires told Sky Sports: "The best signing for me is Unai Emery, the manager. Of course I believe in the players, and especially the new players.

"But for Emery it's very important to start very well. He knows he's at a big club, and has a lot of pressure, but I think he has a big character and spirit.

"He won in Spain. He won in France. He has a lot of experience and I hope for him and Arsenal that he is successful with the club."

Emery's Arsenal begin the new Premier League season with a trial by fire, facing defending Champions Manchester City on August 12, followed by a trip to London rivals Chelsea on August 18.

with passion, excitement and intensityEnjoying the training footage? Then you’ll this... July 16, 2018