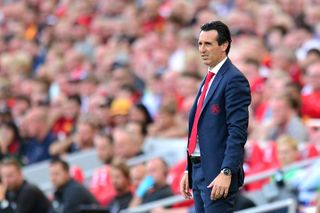 Arsenal manager Unai Emery has asked his players to vote for their preferred choice of club captain.

Emery introduced a pool of five skippers following his appointment last summer but saw his original choices decimated by the summer departures of Laurent Koscielny, Petr Cech and Aaron Ramsey.

Under-fire midfielder Granit Xhaka has so far worn the armband in the Premier League this term but is yet to convince in the role and was jeered by his own fans during the weekend win over Aston Villa, while the peripheral Mesut Ozil is the only other member of the initial five still at the club.

“He likes his five captains. We all did a vote the other week so we’ll see what happens and see who gets named,” said Holding.

“It was just write names down and then give them to the manager and he will go through them obviously with his input and we’ll see what happens.

“I have no idea (when an announcement will be made), but there is a lot of leaders in that team who are helping each other out and pushing each other on.

Best feeling in the world, honoured to wear the armband! Top work from the boys tonight! You knowww!!! 🎶#COYGpic.twitter.com/kKqzvRigmM— Rob Holding (@RobHolding95) September 24, 2019

“Now that we’ve got these five captains that the manager has brought in it’s spreading the leadership group rather than having one person to dictate it.

Arsenal have been repeatedly criticised for a perceived lack of leadership, dating back to the reign of Arsene Wenger.

Out-of-favour Ozil was named captain for Tuesday’s Carabao Cup win over Nottingham Forest before passing the responsibility to centre-back Holding when he was substituted.

While he was unwilling to reveal his choice of skipper, Holding described Xhaka as “a great leader” and also praised the influence of experienced summer signing David Luiz.

“I love Granit in the changing room. I think he is great. He is really switched on to people being late, people using the phones. He is quick to dishing out the fines,” said Holding.

“I think he is a great leader and just another positive person to have in the changing room.

“He is very sort of demanding and makes demand of us. He puts accountability on ourselves, which is important as a leader.”

Asked if Arsenal have more leaders than critics believe, Holding added: “For sure. You can see it in training. The way David Luiz has come in and when he is talking in front of the group he speaks really well.

“He speaks highly of us so he’s a good addition to bring in.”

Holding marked his return from a nine-month injury lay-off by scoring just seconds after taking the armband from Ozil in the 5-0 win over Forest.

And the 24-year-old has aspirations of performing the role again.

“I would love to be a captain and being captain of Arsenal is unbelievable. It would be a great feeling,” he said.

“We will see what happens in the next couple of weeks. If I get it, then I’ll be more than happy and honoured to do it.”