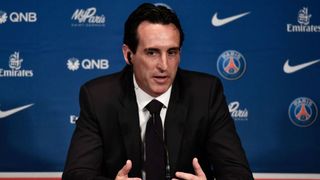 Paris Saint-Germain coach Unai Emery is undaunted by the expectations he will face after taking over from Laurent Blanc.

Former Sevilla boss Emery was last week confirmed as the replacement for Blanc, who was disposed of despite leading PSG to successive domestic trebles.

Emery expects to thrive under that pressure, yet he is unwilling to focus solely on PSG's European exploits.

"PSG's expectations are extremely high. It's a club of winners. I thrive on challenges... We want to win everything," Emery said.

"What is the limit of this team? There is none.

"The Champions League? Of course it is an important aim, but there are others.

"Our goal is to continue progressing, improving and growing. There is great optimism. With the current team, I think we can achieve big things."

But Emery hinted PSG still need to strengthen in attack before the start of the new campaign.

"We still need to make a few adjustments and we're currently looking for the perfect option to strengthen our attack," he added.

Meanwhile Al-Khelaifi insisted Emery was always at the top of PSG's list of targets to replace Blanc.

"He was the first option, the first choice, we didn't speak to anyone other than coach Unai," Al-Khelaifi said.

"He is a coach who works very, very hard, who is close with the players and who has developed young players - that is very important for us."