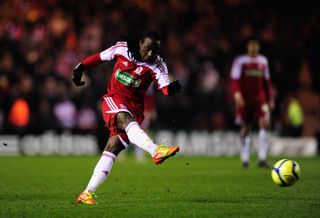 The 25-year-old will join the Welsh club until the end of the season and is eligible to represent Swansea in the UEFA Europa League if needed.

Emnes has previously played for Swansea, spending a month on loan at the club in October 2010.

He made five appearances in that stay, scoring twice, including the winner in a south Wales derby against Cardiff City.

"Marvin Emnes is set to return to Swansea City after agreeing a loan deal from Middlesbrough that is now subject to Premier League and international clearance," a statement on Swansea's website read.

Emnes has made 24 appearances for Middlesbrough this season, scoring one goal.

The Netherlands attacker has played 160 times for Middlesbrough since joining from Sparta Rotterdam in July 2008.