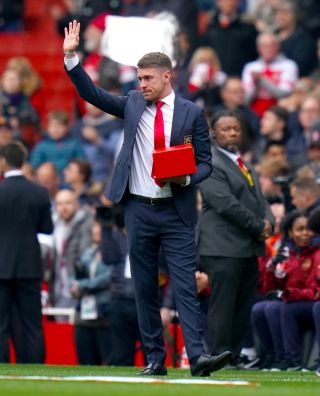 Aaron Ramsey broke down in tears on the Emirates Stadium pitch as he bade an emotional farewell to Arsenal.

The Wales midfielder will join Juventus when his contract expires at the end of the season, bringing down the curtain on an 11-year stay in north London.

Ramsey, 28, has been absent recently with a hamstring injury which meant his playing days with the Gunners ended when he was forced off during the 1-0 Europa League quarter-final win in Napoli last month.

Signed from Cardiff in 2008, Ramsey would go on to become Arsenal’s highest-scoring midfielder of all time – hitting two FA Cup final winning goals in 2014 and 2017.

After receiving a guard of honour from his team-mates following a 1-1 draw with Brighton, Arsenal’s final home game of the campaign, Ramsey was presented with a memento by club chairman Sir Chips Keswick.

He then broke down as he stood next to Petr Cech, who is retiring at the end of the season, before giving an emotional television interview.

“Obviously it’s very emotional, it’s been a hell of a journey,” he told Sky Sports.

“Eleven years of my life, so much has happened in that, when I look back. You can tell by my voice how much it means to me.

“I’m just grateful for the opportunity to play for this great club and spend so many years.

“I spent 11 years here, I came here 17 years old – a boy – and I’m leaving a man. I’ve got a family, my wife, my kids, so much has happened, I’m just grateful for the opportunity here.

“Obviously I’m really excited for the new challenge and new chapter in my life (at Juve) but today it’s all about this.

“This is where I grew up here, I just want to take this in today and let it settle in for a few more days before I can really look forward and concentrate on that.”

Ramsey highlighted his first FA Cup final goal, an extra-time winner against Hull which ended Arsenal’s nine-year run without a trophy, as his favourite memory.

“The FA Cup win against Hull has to be the favourite because we’d gone a few years without winning the trophy,” he said.

“I’d been playing really well that season until Christmas time when I got injured, and I had a few setbacks as well and it was really gutting, but then to come back and get a couple of games then to cap it off with a win in the final, that meant a lot.”

Ramsey can also now look forward to returning to playing Champions League football with a Juve side who recently won their eighth successive Serie A title.

“I am going to club that’s playing in the Champions League, and playing with (Cristiano) Ronaldo,” he added.

“And that’s going to really sink in now so I can get my head around that in the next few weeks and really look forward to that challenge.”

Cech paid tribute to his team-mate, saying his departure would be a “big loss” for the club.

“I think when he came from Cardiff nobody really knew how great a player the club brought in and I think he gave everything he could all those 11 years,” said the goalkeeper.