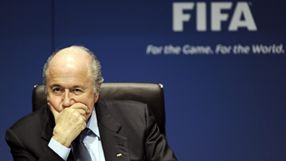 The FA would also consider writing to Mohamed Bin Hammam, the Qatari president of the Asian Football Confederation (AFC), to offer him its support, according to sources close to the situation.

Bin Hammam, a former ally of Blatter's, has strongly hinted he is considering a bid for football's top position, although he has yet to declare his official candidature.

Blatter, who will be 75 on Thursday and was named by The Times newspaper last week as the most powerful man in world sport, is seeking a fourth term as president, the position he has held since succeeding Joao Havelange in 1998.

"We believe that three terms is long enough as FIFA president, and we should write to him (Bin Hammam) to offer our support," said an FA source on condition of anonymity.

The FA is known to still be upset over the way England's candidature for the 2018 World Cup finals was dismissed by FIFA in December, and part of the initiative for a new man at the top is believed to stem from what happened then.

"FIFA needs a complete overhaul, a change of leadership and a modernising, younger man at the helm," sources said.

It would not be the first time the FA has opposed Blatter's presidency. After backing him in 1998, it supported Issa Hayatou of Cameroon, the president of the Confederation of African Football (CAF), who was well beaten by Blatter in the 2002 presidential election. Blatter stood unopposed in 2007.

"The matter has not been discussed but will be considered by the FA Board when nominations have closed and the FIFA Congress agenda has been published," an FA spokesman said.

Blatter is so far the only candidate for the election at the FIFA Congress in Zurich on June 1. Deadlines for nominations close on March 31 and candidates only need the backing of one of FIFA's 208 national associations to stand.

Bin Hammam, a member of the executive committee since 1996, has dropped several hints he is planning to stand against Blatter, and this weekend told his Facebook and Twitter followers: "Competition is the best way to make the organisation vibrant and alive. Competition is good for the organisation, whether president or any other posts."

Blatter, however, remains the overwhelming favourite to continue as FIFA president.

Speaking in Newport, Wales on Saturday after the annual meeting of the law-making International Football Association Board, he dismissed allegations of corruption levelled at his organisation.

"In any situation you cannot please everybody," he said. "That's not possible. I think we are doing a great job.

Blatter said the election process was taking place and the race was open.

"I have received support from different national associations to stand again," he said. If I win ok, if lose I say thank you then go away.

"I'm trying to bring some social and cultural impact. If there are some other candidates then we will fac