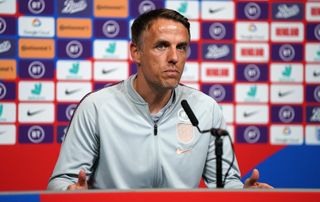 The hosts were made to pay for failing to take their early chances at the sold-out Riverside Stadium, and a late header from substitute Beth England was not enough to prevent a 2-1 defeat.

Neville said: “In terms of the performance I’m not concerned with what I’ve seen today – it actually gives me great hope that this set of players are going in the right direction.

“We should have been at least 3-0 up at half-time but in that little period in the second half they hit us with two sucker-punches and then we dominated the game after that.

“That’s the way it’s falling for us at the moment in time and we’ve got to accept that this is one of those periods.”

England’s post-World Cup slump has now seen the Brazil loss added to reversals to Sweden and Norway as well as a below-par draw against Belgium.

But among the positives for Neville was the performance of substitute England, who made a huge impression when she came on for the final 14 minutes, and could have gone on to snatch an equaliser.

“I think Beth made a brilliant impact,” added Neville. “I know she’s a goalscorer but she has to be patient and get to that level of performance that will get her a starting place.

“She doesn’t need many chances to score goals and we felt we brought her on at the right time.”

Another bonus for Neville was the return of Stockton-born midfielder Jordan Nobbs after an 18-month international absence due to a knee injury.

“Jordan is a top midfield player who loves playing football for England,” added Neville. “She played fantastically and asked to play for 65 to 70 minutes because she was feeling great.

“But we have to protect her and we wanted her to leave the field hungry for more rather than taking her through that barrier of feeling fatigue.”

A crowd of just under 30,000 witnessed England’s frustrating afternoon and contributed to what Neville described as a “best ever” atmosphere for a women’s game.

“There was a buzz in the air from the warm-up and you could feel the atmosphere and the tension,” said Neville.

“Five games without a win is disappointing and we’ve got to reverse this momentum. But the momentum from what we’ve built from the World Cup in terms of the atmosphere is here to stay.”