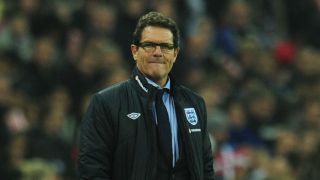 Jordan Pickford is a key figure in England's run to the World Cup semi-finals according to former Three Lions boss Fabio Capello, who said the team "finally discovered a goalkeeper who can make saves".

Pickford only made his full England debut in November 2017, just seven months before the World Cup in Russia, but he made crucial saves in the team's round-of-16 penalty shoot-out victory over Colombia.

The Everton shot-stopper had another solid performance in England's 2-0 quarter-final victory over Sweden, keeping his first clean sheet of the tournament, and Capello praised the 24-year-old's positioning and reactions.

Capello, who managed England to 28 victories and six defeats between 2008 and 2012, told Gazzetta dello Sport that Gareth Southgate's side "have got some fast guys and a great manager".

Which way to Moscow, boss?The are back on the training field right now. July 9, 2018

"Southgate has realised that with two central defenders they would have gone home, so he's put three in there and he's finally discovered a goalkeeper who can make saves," he continued.

"He's got an array of talented players, but he had the intuition of putting [Harry] Maguire at the heart of the three-man defence, he chose Pickford and he has managed the tension levels.

"Pickford has a feel for the position and is reactive."

Looking ahead to England's semi-final clash with Croatia at Luzhniki Stadium, Capello backed his former employers to prevail.

He also claimed Southgate's side are capable of beating France, should they win their semi-final against Belgium, saying: "It's going to be France-England, and in that case I would pick England as favourites."