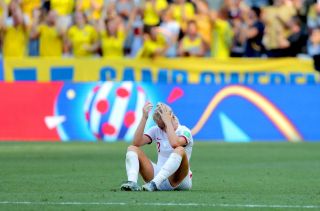 England missed out on a third-placed finish at the Women’s World Cup as they were beaten 2-1 by Sweden in their play-off in Nice.

Sweden raced into a 2-0 lead at the Allianz Riviera, with Kosovare Asllani firing in in the 11th minute after an Alex Greenwood error and Sofia Jakobsson adding a fine strike in the 22nd.

Phil Neville’s Lionesses replied through Fran Kirby’s left-footed effort just after the half-hour mark and two minutes later the ball was in the Swedes’ net again courtesy of an Ellen White finish.

But, just had been the case in the 2-1 semi-final loss to the United States four days earlier, White had what she had thought was an equaliser disallowed following a VAR review.

This time the forward – the tournament’s joint top-scorer with six goals – was judged to have been guilty of a handball.

White’s frustration at the decision was clear, and it ended up a disappointing outing overall for the team after they had the better of the second half but were unable to save themselves from defeat, with Lucy Bronze seeing a late strike cleared off the line by Nilla Fischer.

Victory would have made the campaign in France England’s joint-best performance at a Women’s World Cup, four years on from them securing bronze for the first time in Canada.

Instead they must settle for fourth, while Sweden, the 2003 runners-up, take home bronze for a third time.

With England struggling to get going at the start of the contest and their opponents looking bright, Neville’s side fell behind when Greenwood attempted to clear a cross but succeeded only in sending the ball to Asllani, whose shot went in via Carly Telford’s arm and the post.

Sweden continued to pressurise, with a Jakobsson shot being touched by Telford against the same upright.

And they doubled their advantage six minutes later when Jakobsson collected Stina Blackstenius’ pass, was allowed to advance into the box and hit a fine strike past Telford.

England subsequently started to find some rhythm and pulled a goal back in the 31st minute when Kirby received the ball from Jill Scott, cut in from the right and sent a low shot in off the far post.

Within moments, it looked as if the Lionesses had scored again, White bringing down a Beth Mead delivery with her back to goal, holding off Linda Sembrandt as she turned and slotting the ball in.

But the effort went to a VAR check for handball, and after watching footage back pitchside, which showed the ball appearing to touch White’s arm as she jostled with Sembrandt, referee Anastasia Pustovoytova ruled the effort should not stand – a decision that drew protests from the Manchester City player before play continued.

England were then relieved not to see further sloppiness at the back punished in first-half stoppage time as Blackstenius took the ball off Steph Houghton and lofted an effort on to the roof of the net, and White saw a strike kept out by the outstretched leg of Hedvig Lindahl.

Jade Moore tried her luck on the Sweden goal from outside the box early in the second half, sending her shot well wide, and substitute Jodie Taylor was then played in by Kirby, but hit the post – and the flag went up for offside.

At the other end Julia Zigiotti had a shot gathered by Telford before Kirby touched the ball past Lindahl into the danger zone, with no England player there to capitalise.

There was a special moment in the 74th minute for Karen Carney, who had announced on Friday that she would be retiring after the match, the midfielder replacing Parris to earn her 144th and final England cap.

England then went close to levelling in the 89th minute when Bronze drove an effort goalwards, but Fischer was on the line to clear with a superb header.

Telford subsequently made a decent save to deny Zigiotti before the final whistle confirmed Sweden as the bronze medallists.