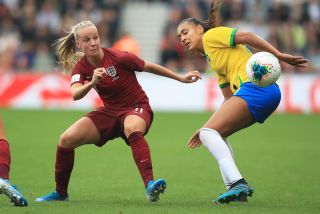 Beth Mead was gifted the only goal as England Women secured their first victory in six matches with a 1-0 friendly win in Portugal.

Arsenal forward Mead pounced on a howler from Portugal goalkeeper Patricia Morais midway through the second half to clinch the Lionesses’ long-awaited win and ease the pressure on boss Phil Neville.

England lost to the USA in the World Cup finals last summer and since their third-place play-off defeat to Sweden they have drawn in Belgium and been beaten by Norway and Brazil.

THERE IT IS. We get the breakthrough! 😅 pic.twitter.com/CLWjoSmGec— Lionesses (@Lionesses) October 8, 2019

The Lionesses survived a stoppage-time scare when Claudia Neto’s free-kick hit the the crossbar, but they held on for a confidence-boosting win.

Neville made four changes to the side that started in Saturday’s 2-1 friendly defeat to Brazil and they looked bereft of confidence for the first 15 minutes.

Portugal looked the better side during the early exchanges without creating any clear scoring chances, while Lyon forward Jessica Silva caused the England defence problems.

Steph Houghton fired a 17th-minute free-kick – England’s first attempt on goal – into the wall and UEFA player of the year Lucy Bronze, playing in a midfield role, saw her effort gathered by Morais at the second attempt.

England looked to inject some intensity to their play after the restart and continued to dominate possession.

Jordan Nobbs was also sent on for England as Neville made a double substitution with 23 minutes left.

The changes kick-started the Lionesses, with Taylor threatening again with a diving header before Neville’s side broke the deadlock in the 71st minute courtesy of a glaring error from Morais.

Alex Greenwood’s cross floated too close to the goalkeeper, but as Morais attempted to make the catch, the ball slipped through her grasp and dropped for Mead to slam the ball over the line.

Nikita Parris went close to doubling England’s lead when she headed just wide after a slick counter-attack before Portugal almost snatched an equaliser in the fourth minute of added time.

Neto’s brilliant free-kick came back off the underside of the crossbar and bounced off the back of Roebuck before the goalkeeper gathered the ball.