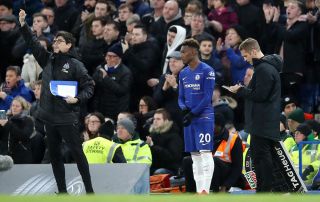 The proportion of Premier League playing time this season for English players has dipped to 30 per cent, Press Association Sport figures show.

Of just over 600,000 minutes played by top-flight players, just under 179,000 minutes have gone to players eligible for England – 30.2 per cent of the total, down from 32 per cent when the data was analysed during the October international break.

National team manager Gareth Southgate had already voiced his concerns over the issue by that stage and on Monday he called up a man without a Premier League start to his name in Chelsea winger Callum Hudson-Odoi.

In the early stages of the season, English players accounted for almost 70 per cent of playing time at Burnley, with Bournemouth over 50 per cent and Everton also around that mark.

Fast-forward five months and roughly 22 games per club, though, and there is no team remaining with over half of playing time devoted to those eligible for the Three Lions.

The Clarets continue to lead the way at a much-reduced 44.5 per cent, with Salford-born Scotland international Phil Bardsley locking down the right-back spot and Republic of Ireland winger Robbie Brady enjoying a run of games in mid-season after he recovered from injury.

Bournemouth’s mark has fallen to 36.9 per cent, with Colombian record signing Jefferson Lerma established in midfield and Norway’s Josh King a regular while strike partner Callum Wilson has missed time with injury.

Everton have dropped to fifth in terms of minutes given to England-eligible players, with Theo Walcott fading out of the starting line-up and Dominic Calvert-Lewin’s involvement inconsistent allowing Leicester and Southampton to move ahead of the Toffees.

Buzzing to get my first @england senior call up!!! Proud day for me and my family, the hard work continues❤️🙏🏾🦁 pic.twitter.com/6fyIhzGVC5— Callum Hudson-Odoi (@Calteck10) March 18, 2019

Hudson-Odoi is one of only four English players to feature for Chelsea in the league this season, matching Wolves for the lowest number in the top flight.

His six substitute appearances total just 124 minutes but even that is over 100 minutes more than former England defender Gary Cahill (22) while Ruben Loftus-Cheek – who withdrew from Southgate’s current squad – has played 471 minutes.

Ross Barkley has managed 1,043 but the Blues’ total of 1,660 minutes, or 3.5 per cent of all playing time, is the lowest share for English players in the Premier League.

Arsenal are only 52 minutes better off and though Unai Emery has used seven English players in the league, three of those – youngsters Bukayo Saka, Eddie Nketiah and Joe Willock – have combined to play only 17 minutes.

English is the leading nationality in terms of playing time at 16 of the 20 Premier League clubs, with Huddersfield and Wolves joining Arsenal and Chelsea as the exceptions. Those four clubs along with Newcastle are the bottom five in playing time for England-eligible players.

Title rivals Manchester City and Liverpool are just above that line while West Ham’s previously meagre percentage has been boosted by the increased involvement of another new inclusion in Southgate’s squad, Declan Rice.