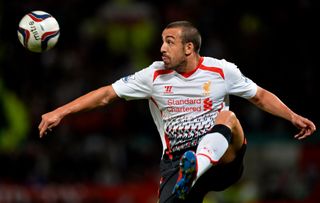 Enrique has not featured for Liverpool since their 3-1 win over Crystal Palace on October 5 because of a knee problem.

But Rodgers, whose side sit five points adrift of Premier League leaders Arsenal ahead of Fulham's visit to Anfield, is hopeful that the 27-year-old will be fit in time to face Martin Jol's men.

"He has trained and his knee is much better so we'll be hoping he will be available for the weekend.

"That's something we'll assess in the next 24 hours.

"It will be great to have Jose back."

Left-back Enrique moved to Anfield in 2011 following a four-year spell with Newcastle United. The Spaniard has made over 80 appearances for Liverpool in all competitions, scoring two goals.