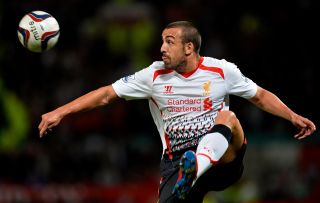 The Spanish left-back came off the bench in the 4-0 Premier League thrashing of Fulham before the international break, having being sidelined since the victory over Crystal Palace in October.

However, Enrique has suffered a setback and Rodgers expressed his frustration on Thursday at losing the former Newcastle man once again.

Rodgers said: "Jose Enrique looks like he will need an operation, he's been out for a while but he's still in pain so that is disappointing.

"We're speaking to the doctor today, (and) will get an idea about how long he will be out. We're not sure at the moment.

"He will probably need an operation. It’s a blow for us because he's a very talented player."

Rodgers is hopeful the in-form striker will be fully fit to face Everton in the Merseyside derby at Goodison Park on Saturday.

"He (Sturridge) went to England with an injury," said Rodgers. "He's had a dead leg for three to four weeks that he’s been playing through. Obviously, he hardly trained after he left following the Fulham game,

"Sometimes managers are led by players as well. The manager can only ask the player how they're feeling, and if they’re happy, then that’s something you’ll consider.

"(England manager) Roy (Hodgson) has spoken with Daniel and had that conversation and (Sturridge) played the game. He's back and recovering after that. We'll see how he is."

Captain Steven Gerrard (hip) also sat out the defeat against Chile at Wembley but returned to play 56 minutes against Germany and has reported no ill effects.

Rodgers said of his skipper: "It's very simple; he's a brilliant professional. He's someone who manages his body really well. He's got a superb medical team to support that.

"He knows his body and the injections he's had before have helped him. In the last 18 months, you only have to look at his injury record - it's been very good."