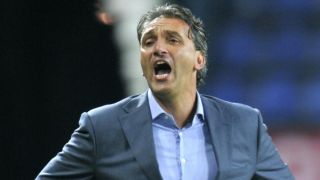 Go Ahead Eagles suffered a 1-0 defeat to De Graafschap in the second leg of their relegation/promotion play-off, meaning their drop from the Eredivisie was confirmed.

The Eagles - who won promotion via this system two years ago - had fallen to a surprise 1-0 reverse in Friday's opening leg away from home, and it was a similar story on Monday as the Eerste Divisie outfit triumphed again, this time thanks to Vincent Vermeij's 72nd-minute winner.

NAC Breda, the other Eredivisie side involved in the play-offs, earned themselves the chance of retaining their status as they won 3-0 at home to VVV Venlo to seal a 4-0 success overall.

A brace for Guyon Fernandez and one from Divine Naah proved the difference for Robert Maaskant's men.

De Graafschap's win over the Eagles means they will now have the chance to earn promotion to the top flight, as will Volendam, whose 1-1 draw at Eindhoven was enough to see them progress to the final round.

Having won the home leg 2-1, Volendam moved further ahead in the tie courtesy of Brandley Kuwas' goal on the hour, with Tom Muyters' stoppage-time effort for Eindhoven proving in vain as the visitors advance 3-2 on aggregate.

Roda JC prevailed by the same aggregate scoreline against Emmen, a 2-2 draw proving enough after a 1-0 success in the opening leg.

Roda were twice in front through Raymond Gyasi and Mitchell Paulissen and although they were pegged back by Boy Deul and Roland Bergkamp - nephew of Dennis - they held on to earn a chance of promotion.