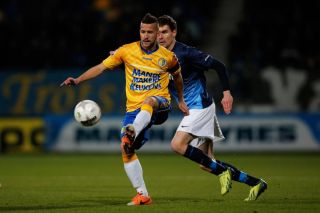 And, after overcoming De Graafschap in the the second round of the play-offs, RKC are on the brink of succumbing to the drop following a disastrous first-leg performance in Rotterdam.

A Khalid Karami goal and a penalty from Lars Veldwijk gave Excelsior a 2-0 success, putting them within touching distance of finishing an impressive campaign in perfect fashion.

Anything other than a defeat by two or more goals on Sunday will make sure of Excelsior's place in the top tier, however they are not the only Rotterdam club vying for promotion.

Indeed, Sparta Rotterdam head into their second leg with Dordrecht with the tie very much in the balance.

Sparta, who last competed in the top level in 2010, ended their Eerste Divisie season in 16th, but qualified by virtue of being the best the team in the second period of the term.

But, despite a below-par campaign, Sparta are just one win away from a return to the Eredivisie.

Gert Kruys' side relegated NEC by beating them 4-1 on aggregate in the second round of the play-offs, and demonstrated their resolve to come from behind twice to earn a 2-2 draw with Dordrecht in the first leg of the decisive tie on Thursday.

Jaime Bruinier's 80th-minute strike salvaged a draw for Sparta, however, it is Dordrecht who have the advantage on away goals and should be the firm favourites heading into the second leg.

Dordrecht finished second, just six points behind champions Willem II, and will be confident of ensuring promotion after losing just one home league game all season.

Meanwhile, at the other end of the spectrum it is all to play for in the fight for a UEFA Europa League place as Groningen host AZ.

The first leg in Alkmaar ended goalless, and Groningen coach Erwin van de Looi is hopeful that the support of home fans will be able to see them through in the second leg.

"Sunday afternoon we will have a full house and we can use the support of the fans well," Van de Looi told Groningen's official website.

"That should be an advantage for us. But let us not be fooled and play football like headless chickens.

"It is wonderful that we are up to the last game in the race for the last European ticket."