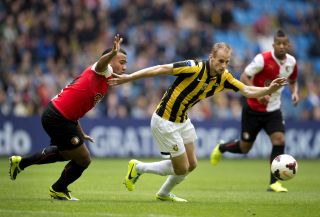 Peter Bosz's side have surged to the top of the table in recent weeks and appear in no mood to relinquish it with Ajax and Twente leading the charge to narrow the gap.

PSV are in poor form away from home in the league with five consecutive league defeats on their travels. And, with no win in the Eredivisie since the start of October, pressure is beginning to build on coach Phillip Cocu.

Ajax will be ready to take advantage of any slip from the leaders when they welcome NAC Breda to the Amsterdam Arena.

Frank de Boer's side have not lost to Breda since January 2008 and come into this match on the back of three consecutive league wins that have produced 10 goals and a trio of clean sheets.

However, Ajax continue to be without top goalscorer Kolbeinn Sigthorsson after he injured ankle ligaments playing for Iceland in the FIFA World Cup Europe play-off in mid-November.

Former leaders Twente have lost ground on Vitesse, despite only one defeat in 11 league outings, draws against NEC and PEC Zwolle costing them top spot.

Twente face AZ, who are only three points behind them in the table and will be keen to end a run of three games without a win.

Heerenveen will be buoyed by their last-minute equaliser on Wednesday that earned them a point against ADO Den Haag, and Marco van Basten will be hoping to carry that into their clash with high-flying Feyenoord.

Go Ahead Eagles will look to get back to winning ways at home to PEC Zwolle. The hosts have only lost once at home this season while Zwolle have not won away from home since August.

At the bottom, RKC Waalwijk, who have picked up eight points from the last 15 available and only lost once since the end of October, face Cambuur with only two points separating the sides.