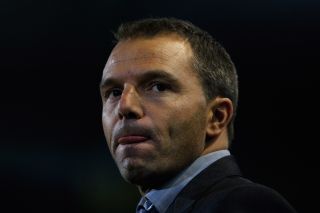 After a goalless first half, Danny Bakker and Ninos Gouriye scored in the space of four minutes as struggling Den Haag stunned Twente at Kyocera Stadion.

The visitors fought back and goals from Luc Castaignos and Roberto Rosales brought them back on level terms with 14 minutes remaining.

Maurice Steijn's side were not to be denied, though, and secured their third win of the season to move above NEC Nijmegen courtesy of Van Duinen's winner two minutes from time.

It was a first defeat in seven for Michel Jansen's side and they are now level on points with Ajax, who failed to take advantage of Twente's defeat as they were held to a 0-0 draw by bottom-of-the-table RKC Waalwijk.

The Dutch giants were beaten by Celtic in the UEFA Champions League in midweek and endured further frustration on their return to the Amsterdam Arena.

RKC had lost seven consecutive games in all competitions before the daunting trip to Ajax, but stopped the rot with an unlikely point.

NAC Breda had no such problems in finding the back of the net as they hammered Go Ahead Eagles 5-0 at Rat Verlegh Stadion.

Rydell Poepon scored twice, while Jordy Buijs, Jeffrey Sarpong and Stipe Perica were also on target as the Deventer outfit were put to the sword.

The victory moved NAC up to 10th, with their opponents slipping down to 12th spot.

In the other game to be played on Saturday, Cambuur Leeuwarden secured their third Eredivisie win of the season at the expense of Utrecht.

Yassine Ayoub put the visitors in front after 10 minutes, but Cambuur rallied in the second half and goals from Michiel Hemmen, Erik Bakker and Marcel Ritzmaier sealed the points.