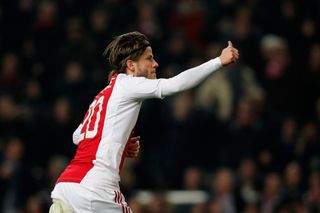 Draws against Cambuur and NAC Breda had allowed second-placed Feyenoord to cut the gap on leaders Ajax.

But the defending champions, who lead Feyenoord by eight points, returned to winning ways in style in front of more than 51,000 fans in Amsterdam.

Stefano Denswil headed the hosts into a 29th-minute lead, rising highest to nod in Lasse Schone's free-kick from the right.

Ajax doubled their lead with an excellent team move just before the hour mark as Bojan found Ricardo van Rhijn, who bided his time before delivering for Schone to tap into an empty net.

And Bojan capped the victory with a terrific 25-yard curling effort, just his second goal this year for the club.

Feyenoord also coasted to a big win, scoring four second-half goals in a 5-0 rout of Go Ahead Eagles.

The home side opened the scoring in the 14th minute through Lex Immers.

Tonny Vilhena extended their advantage four minutes after the break and the goals flowed from there as Jean-Paul Boetius, Mitchell te Vrede and Miquel Nelom also got on the scoresheet.

Roda JC missed a chance to climb off the bottom of the table with a 1-0 home loss to fellow strugglers RKC Waalwijk. Romeo Castelen scored the game's only goal in the 22nd minute.

Elsewhere, ADO Den Haag came from behind to draw 1-1 with PEC Zwolle, and AZ played out a goalless draw against Cambuur.